Introduction to the Anatomy and Physiology of the Auditory System

The following article is written to provide a general understanding of the structures within the auditory system and how they function. The auditory system is comprised of three components; the outer, middle, and inner ear, all of which work together to transfer sounds from the environment to the brain.

The outer ear includes the portion of the ear that we see—the pinna/auricle and the ear canal. 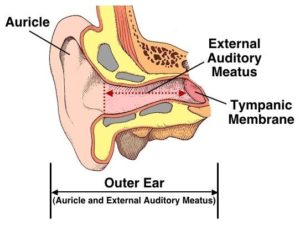 The pinna or auricle is a concave cartilaginous structure, which collects and directs sound waves traveling in air into the ear canal or external auditory meatus.

The ear canal or external auditory meatus is approximately 1.25 inches long and .25 inch in diameter. The inner two-thirds of the ear canal is imbedded in the temporal bone. The outer one-third of the canal is cartilage. Although the shape of each ear canal varies, in general the canal forms an elongated “s” shape curve. The ear canal directs airborne sound waves towards the tympanic membrane (eardrum). The ear canal resonates sound waves and increases the loudness of the tones in the 3000-4000 Hz range.

The middle ear is composed of the tympanic membrane and the cavity, which houses the ossicular chain. 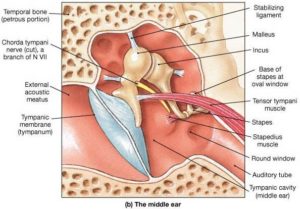 The tympanic membrane or eardrum serves as a divider between the outer ear and the middle ear structures. It is gray-pink in color when healthy and consists of three very thin layers of living tissue.

The inner ear is composed of the sensory organ for hearing—the cochlea, as well as for balance—the vestibular system. The systems are separate, yet both are encased in the same bony capsule and share the same fluid systems. 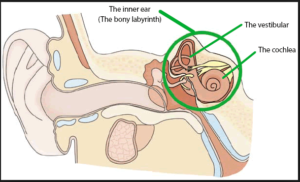 The balance part of the ear is referred to as the vestibular apparatus. It is composed, in part, of three semicircular canals located within the inner ear. The vestibular system helps to maintain balance, regardless of head position or gravity, in conjunction with eye movement and somatosensory input. The semicircular canals are innervated by the VIIIth cranial nerve

The cochlea is composed of three fluid-filled chambers that extend the length of the structure. The two outer chambers are filled with a fluid called perilymph. Perilymph acts as a cushioning agent for the delicate structures that occupy the center chamber. It is important to note that perilymph is connected to the cerebrospinal fluid that surrounds the brain and the spinal column. The third fluid filled chamber is the center chamber, called the cochlear duct. The cochlear duct secretes a fluid called endolymph, which fills this chamber.

The cochlear duct contains the Basilar membrane upon which lies the Organ of Corti. The Organ of Corti is a sensory organ essential to hearing. It consists of approximately 30,000 finger-like projections of cilia that are arranged in rows. These cilia are referred to as hair cells. Each hair cell is connected to a nerve fiber that relays various impulses to the cochlear branch of the VIIIth cranial nerve or auditory nerve. The “pitch” of the impulse relayed is dependent upon which areas of the basilar membrane, and hence, which portions of the Organ of Corti are stimulated. The apical portion of the basilar membrane (the most curled area of the cochlea) transfers lower frequency impulses. The basal end relays higher frequency impulses.

The Path Of Sound Until Perception

Sound Transmission through the Outer Ear

Air transmitted sound waves are directed toward the delicate hearing mechanisms with the help of the outer ear, first by the pinna, which gently funnels sound waves into the ear canal, then by the ear canal. 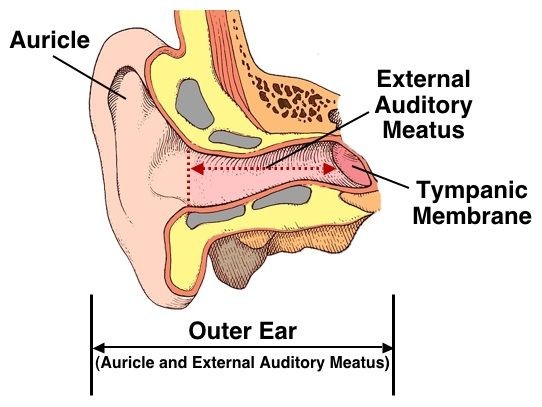 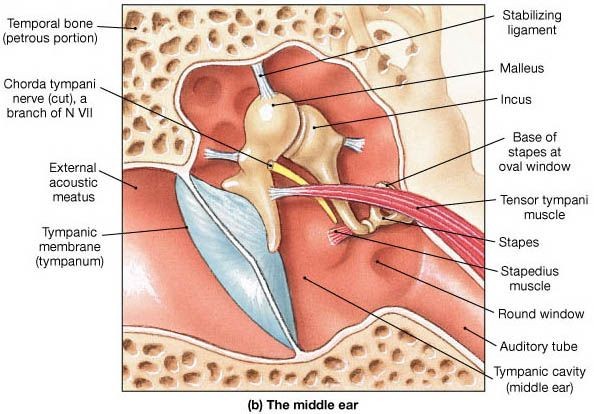 Sound Transmission through the Middle Ear

When air movement strikes the tympanic membrane, the tympanic membrane or eardrum moves. At this point, the energy generated through a sound wave is transferred from a medium of air to that which is solid in the middle ear. The ossicular chain of the middle ear connects to the eardrum via the malleus, so that any motion of the eardrum sets the three little bones of the ossicular chain into motion

Sound Transmission through the Inner Ear

The ossicular chain transfers energy from a solid medium to the fluid medium of the inner ear via the stapes. The stapes is attached to the oval window. Movement of the oval window creates motion in the cochlear fluid and along the Basilar membrane. Motion along the basilar membrane excites frequency specific areas of the Organ of Corti, which in turn stimulates a series of nerve endings. 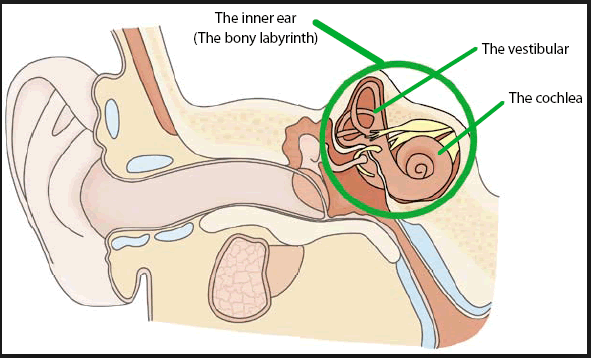 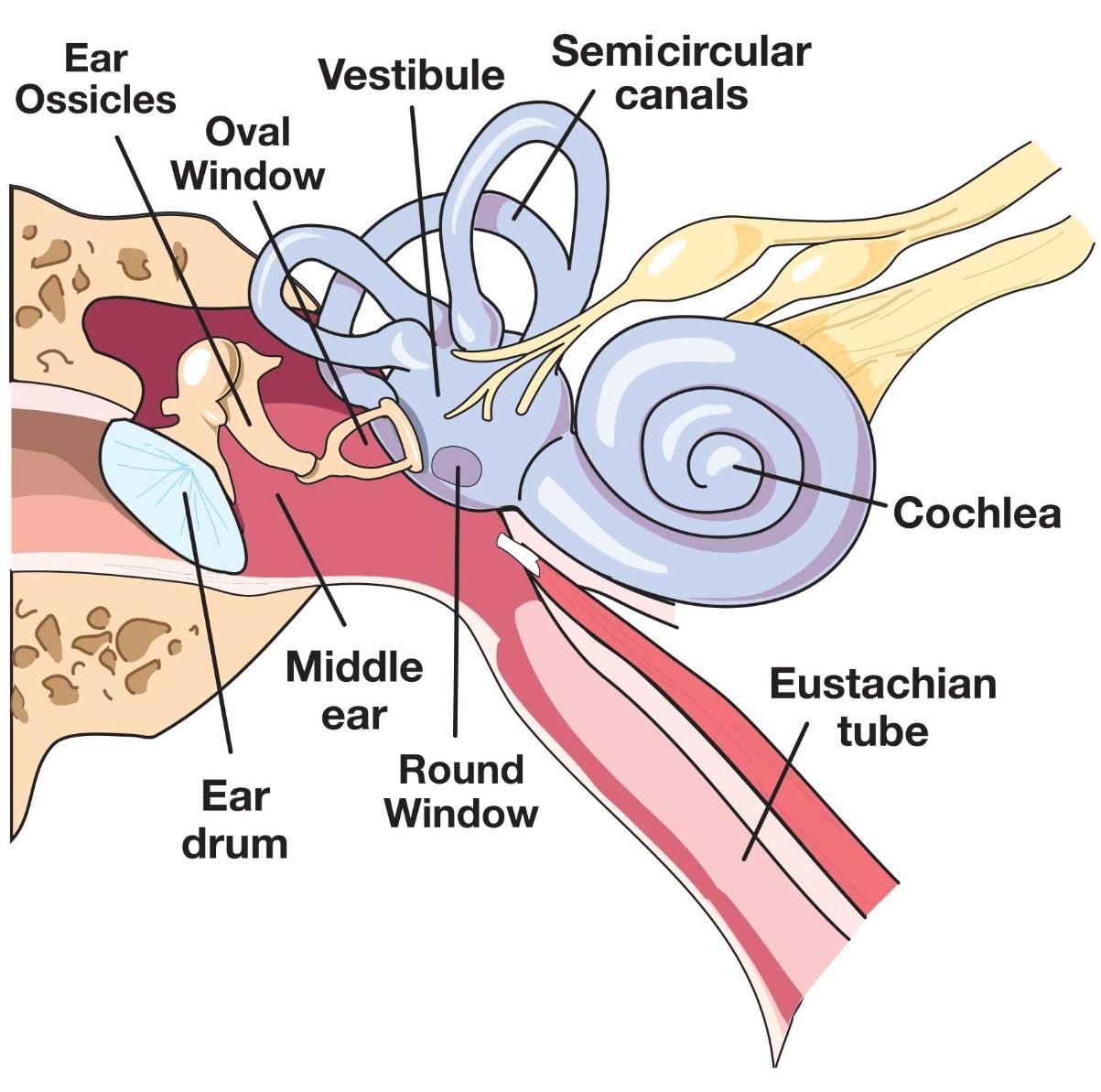 Sound Transmission to the Brain

With the initiation of the nerve impulses, another change in medium occurs: from fluid to neural. Nerve impulses are relayed through the VIII C.N., through various nuclei along the auditory pathway to areas to the brain. It is the brain that interprets the neural impulses and creates a thought, picture, or other recognized symbol.

All patients are seen on an appointment basis. Should you wish to make a booking, please contact our receptionists on
(011) 482-5530 and they will assist you in finalising a suitable date and time. 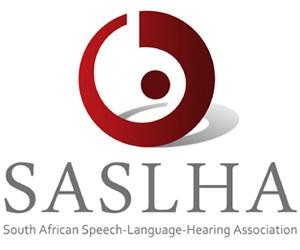 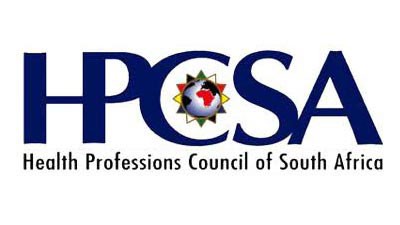