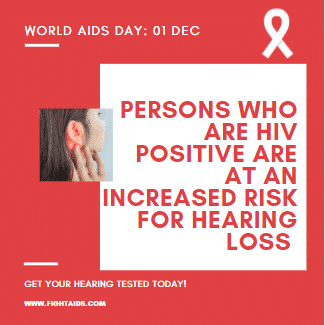 There are an estimated 38 million people living with HIV globally. Another 1.5 million people became infected in 2020. HIV is significantly associated with an increased risk of developing sensorineural hearing loss (permanent) in patients between the ages of 18 to 35 years, and more commonly in male patients. Up to 84% of persons with HIV present with signs or symptoms that may warrant being seen by a hearing health practitioner.

Diseases of the head and neck which include auditory and otological symptoms, often occur in persons with HIV. Symptoms recorded consist of ear pain, loss of balance, ringing in the ear, discharge and hearing loss.

The regular occurrence of f middle ear infections is often attributed to the impairment of conductive hearing loss (temporary if treated), however the precise etiology of cochlear, and central auditory processing deficits still remains unclear. Direct effects of HIV, opportunistic infections, ototoxic side effects of antiretroviral therapy (ART), and immunologic responses to the central nervous system involving the auditory pathway have been attributed to hearing loss and HIV as follows:

As a result of the disease, the patient is at an increased risk of developing multiple and recurrent opportunistic infections due to their immunocompromised state.  Treatment sometimes involves medication with known ototoxic effects. Thus increasing the risk of ototoxic- induced hearing loss.  An example of this is the medication used to treat Tuberculosis, particularly for the multidrug resistant strains – high doses of antibiotics, such as streptomycin, which is potentially devastating to hearing abilities. Fortunately a great deal of research has been conducted and new solutions are in process to overcome the effects of hearing loss.

There have been significant improvements in the treatment and management of HIV globally and the focus has shifted from survival to the level of the quality of life.

Healthy hearing is central to a good quality of life, relationships, independence and optimal functioning. This highlights the need for early detection of auditory and otological symptoms and emphasises the need for regular audiological monitoring  and the importance of it in a routine medical check up.